A passion that began in college has now come true for a young Calgary man who has a special place in his heart for one of the city’s most essential services.

Nick Blonski is one of a bunch of car enthusiasts in town, but they’re not interested in fast, flashy sports cars.

“A lot of people don’t know this, but there’s a whole community of us in this city that keeps track of all the buses and all the trains and sort of documents them online,” Blonski said during from an interview with CTV News.

He says his love for the vehicles that made up Calgary Transit’s fleet for about 40 years began when he got into playing bus simulation games.

“There was no particular reason why I played them; I just played them because I thought they looked fun,” he said.

Blonski says his interest led him to start taking photos of buses in use and learning all he could about the vehicles, their origins and how they changed over the years.

Part of the hobby he and his friends enjoy is scouring the city and region for old buses that might be lying around, unused and forgotten.

That’s when Blonski got his hands on his beloved bus, which he calls “1130.”

“It was his fleet number with the city,” he said.

Although Blonski’s bus was originally built in 1982, he says it comes from the same series of vehicles that dominated Calgary’s roads for 30 to 40 years.

“This was originally built in 1958-59 and they continued to make them until 1986, so they were in production for a very long time,” he said.

“Given how iconic it was at the time and the fact that there aren’t any left today, it’s a pretty significant historical artifact.”

He says the bus, which had stood on land near Calgary for about eight years after being sold by the city, was in “excellent mechanical condition” and needed very little work to keep it running.

“Anything that was broken I fixed, but it was just little things like the throttle that I had to replace and a few corroded parts here and there.

“Everything else is worthy of passing all safety inspections.”

Michael Voss, Blonski’s friend who helped him document the process online, says he was happy to be part of the restoration project.

“These buses were built to last.”

Although Blonski cannot take any passengers due to licensing restrictions, 1130 has a full set of seats, all lovingly restored by him and his friends. 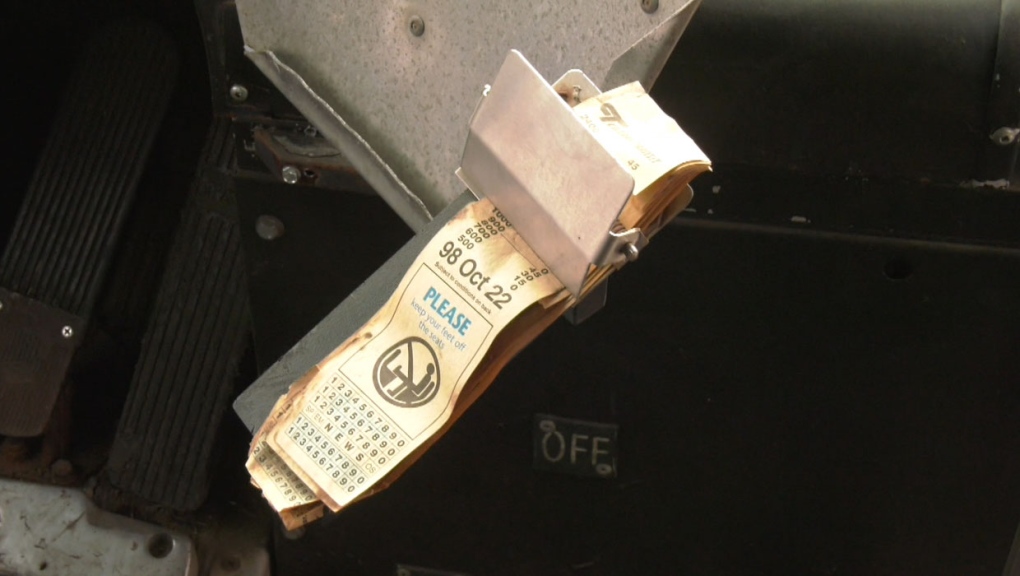 But work on the vehicle isn’t done yet, he says.

“Ideally, in the long term, I would like to restore it to what it looked like when it was just renovated, which is around 2004,” Blonski said.

“All that rust fixed, all the corrosion fixed, engine built to run like new.”

There is also a part of the iconic vehicle he would like to acquire that has so far eluded him.

“Most important, the payment box that’s inside, I wish I had an original blue box like that like all the buses had when they were in service.”

If you want to learn more about Blonski’s restoration project — or if you want to part with a box of tickets at a fair price — you can find out more on his website.