By Andy Furman
The Point/Arc

And the party will last for five months.

The Point/Arc will celebrate its 50th anniversary on Monday June 6 – and Paul Gerwe promises the party will be one to remember.

“One major event a month for five, celebrating our 50th anniversary,” he said, “we will be having a dinner for all of our past presidents from The Point/Arc, a Pickleball tournament, a major raffle, a Covington Block Party and our Boots ‘n Brews Fundraiser in October.

50 years of service will be celebrated not just with The Point, its staff and alumni, but with the entire town of Covington, Gerwe said.

And one person has been there from the very beginning – Judi Gerding.

In fact, for Gerding, President and Founder of The Point/Arc, it has been a personal journey to foster a better life for her son Steve and others with intellectual and developmental disabilities known as (I/DD ).

At a young age, Steve was diagnosed with Rubinstein-Taybi Syndrome.

In 1972, three groups of parents united to form an advocacy group to help loved ones diagnosed with intellectual/developmental disabilities (I/DD).
Today, this group has grown into a holistic agency with a wide range of 24-hour programs.

“Our history of bridging the gaps by creating integrated programs empowers people with I/DD to become contributing and inclusive members of our community and provides the self-esteem and pride we all crave,” said Gerding.

In 1982, Le Point/Arc opened its first social enterprise – Le Point Restaurant to provide vocational training for people with I/DDs. In 1985, they added the Point Commercial Cleaning Company and Employment Program to provide job training, job placement, and lifelong follow-up. The Point Commercial Laundry was established in 1996. In 2012, The Point/Arc opened as The Point Apparel Company. The Point Perk Coffee Shop opened in 2015 for the community to come in for a great cup of coffee and see the mission in action, Gerding said. 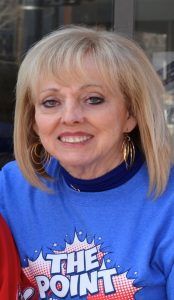 The Point/Arc established its first group home in 1995. The Point currently owns and operates 16 well-maintained homes in beautiful neighborhoods that are home to nearly 60 residents. “We pride ourselves on building Point families,” Gerding said.

Group homes are located in Campbell, Kenton and Boone counties.

And in November 2021, Point Proud TV debuted. The show is produced and directed by Point/Arc staff in conjunction with the Telecommunications Board of Northern Kentucky. The half-hour show highlights community development, such as new restaurants, new stores and upcoming community events.

The aim of the show is to demonstrate the abilities of people with I/DD and, at the same time, to raise awareness of The Point/Arc and Zembrodt Education Center.

Today, The Point/Arc offers educational programs that include social communication, bridging programs and career development. In 2013, The Point/Arc added case management as a way to help individuals and families find resources and services through person-centered planning that will help them achieve their dreams and aspirations.

The Point/Arc now serves more than 1,400 people a year through its programs and services. The Point/Arc is always looking for new ways to fill service gaps and integrate people with I/DD into the community to reach their full potential.