Shortly after departing Denver on the Rocky Mountaineer luxury train, Amtrak’s California Zephyr slid down a parallel track. The passengers on both trains smiled and waved, surprised to see themselves so close together.

How would their train journey compare to mine, I wondered? My traveling companions must have had the same thought.

“We have better windows,” someone shouted on the Mountaineer. “We’ve got better food,” echoed the chorus. Soon Amtrak’s silver coaches sped their way west as Rocky Mountaineer sped along at a steady pace, averaging just 35 mph over the two days it would travel 354 miles to Moab, Utah. .

Passengers lean out of the open vestibule of the luxury Rocky Mountaineer train to snap photos of the passing scenery.
– Courtesy of Katherine Rodeghier

Speed ​​is not the point. Exceptional service and spectacular views seen in more ways than one blur set Rocky Mountaineer apart from other rail travel. It has won numerous awards for its routes in Western Canada since its founding over 30 years ago. Now, Rocky Mountaineer is repeating its luxury train travel formula on its first Southwestern United States route. The Rockies to Red Rocks route was launched last August and now runs from spring to fall.

From my glass-domed coach, I drank in panoramic views of steep canyons and Colorado River valleys as I relaxed in a spacious, reclining seat. When I wanted to stretch my legs, I walked into an open-air vestibule, poked my head over the side of the train and watched its sleek navy blue and gold carriages turn in a curve . Passengers upgrading from Silverleaf to Silverleaf Plus service have yet another viewing option: access to a lounge car where hosts mix cocktails and serve premium liquor as the scenery unfolds. Rocky Mountaineer has no sleeping compartments, opting instead to lodge passengers overnight in hotels along the route so they don’t miss a moment of daylight sightseeing. We landed before dark in Glenwood Springs, Colorado. While I was still on the train, a host gave me my room key so that I could go straight to the hotel where my luggage, which had arrived separately by road, was waiting. Such service gave me ample time to explore the town known for its hot springs and Wild West history, eat dinner and sleep in a real bed to get up rested and ready for an early morning departure.

On board the Rocky Mountaineer, meals are included in the train fare and were served restaurant-style on a navy tablecloth at my seat. Breakfast options included a local berry frittata or waffle. The lunch main was a choice of cilantro or rosemary crusted coho salmon and Durango honey roasted pork loin followed by dessert from the Aspen Baking Company. A charcuterie plate featured bites of Colorado-raised bison, elk and venison. Hosts poured alcoholic and non-alcoholic beverages throughout the trip at no additional cost. 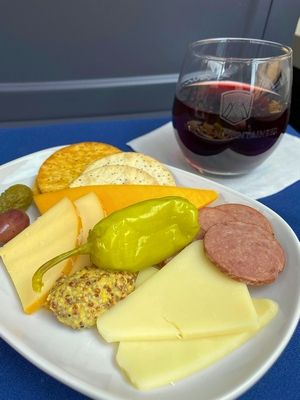 Wine and a charcuterie plate are among the many dishes served with meals aboard the Rocky Mountaineer.
– Courtesy of Katherine Rodeghier

An easy camaraderie formed between passengers and hosts who told stories and set us up for camera-ready scenery. In the 13-mile-long tunnel, we counted 28 of the 30 tunnels still standing since construction in 1904. At the 6-mile-long Moffat Tunnel, we learned of the Denver banker who spent his fortune in a railroad crossing the Continental Divide. We spotted whitewater rafters on the Colorado River as it cut through Gore Canyon. At Burns Canyon, cliffs of red sandstone first appeared and reached their rugged peak at Glenwood Canyon, Upper Colorado’s largest sinkhole.

Along the way, hosts encouraged passengers to call when they spot wildlife, possibly bighorn sheep, elk or mule deer. “Moose,” someone shouted and heads swung right as the dripping beast emerged from a creek beside the track.

After spending the night in Glenwood Springs, Rocky Mountaineer passed Palisade and Grand Junction, Colorado’s wine region west of the Rockies. Orchards dotted the base of the Book Cliffs with 6,765-foot Mount Garfield, named after President James Garfield, at the highest point. A sign on red rocks along the route of the Rocky Mountaineer lets passengers know they are passing between Colorado and Utah.
– Courtesy of Katherine Rodeghier

Red sandstone rose along the railway line through the 25 mile long Ruby Canyon. “Wait for it,” the host said, drawing our attention to soon-to-be-visible words painted on the canyon wall marking the Colorado-Utah state line.

Red Rock Country continued to draw oohs and aahs as the train passed Arches National Park on its approach to Moab, the end of Rocky Mountaineer’s westward journey. The discovery of uranium put this small desert town on the map in the 1950s, but today tourism dominates thanks to its position as the gateway to Utah’s “Mighty 5” national parks: Arches, Canyonlands, Capitol Reef, Bryce and Zion.

The Rockies to Red Rocks route can begin in Denver or Moab and typically includes hotel stays in each city. Rates for the three-night Rockies at Red Rocks Classic itinerary start at $1,619. Longer itineraries add stays in Las Vegas or Salt Lake City, self-guided explorations by rental car, or guided coach tours of national parks.

If you are going to

• The information for this article was gathered during a research trip sponsored by Rocky Mountaineer.

Vulnerability of Microgreens to Pathogens Characterized by ...